What a Difference A Year Makes

What a Difference A Year Makes

Our school struggles are no stranger to this blog.  I held my breath in June when we made the move back to the Northern Virginia area.  Sure, it was familiar territory, but many things had happened in the mean time and I wasn't so sure how it would go coming back.

Well, I'm beyond happy to say that not only has the transition been good, but it has been phenomenal!  Our girl is so happy and thriving in her new environment and we couldn't be any happier about it!  She has several friends, feels comfortable talking to them and playing with them, and has even gotten up in front of the class a couple of times for reports, etc.  Last year at school, although she liked it, would never even dream of reading or getting up in front of others.

Last week her school had an assembly for students who made the honor roll for the first 9 weeks.  She was included and was so happy!  And to top it off Grandma was in town and witnessed the assembly too!  She was called up and tripped a little on the floor, but instead of crumbling in a heap, she dusted herself off and marched up to the stage with her class!  She was embarrassed, but took it in stride and moved on!

Not a great picture, but here's our girl getting recognized: 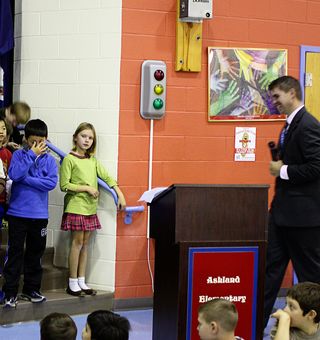 So, so proud and so, so glad she is doing well.  Relief with a capital "R" I tell you!

And Grandma was in town so that Terry and I could go to the annual Marine Corps Ball and get gussied up!  We had a blast and it was one of the more fun balls we've been to in a while. 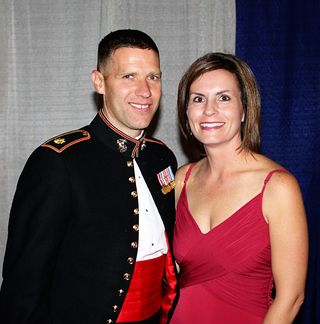 Sadly, not long after this photo I became ill with what now I think was food poisoning.  Several others were sick as well, but we still had fun before all that!

And of course with Grandma's visit came the Christmas list request.  Ella wants everything and Maya wants about 2 things.  The children want for nothing and we're are big opponents to lots of little "crappy" toys under the tree.  We are not video game people at all, but I'm actually considering a Wii maybe.  Anyone have any input on these?  Love it, hate it, indifferent to it?  Keep in mind these are 2 girls that played with a Leap Pad a handful of times and didn't care about it after that.  I'm all ears!

hope you are feeling better, you looked gorgeous.

we did a DS 2 years ago. still playing with it. we did the Wii last year. still playing with it. it comes with the sports games that the whole family can play. get enough controllers and you can have some good family times. i have all boys, so they like the big ticket items. i’ve gone the small item route just to have them end up in a corner by the end of teh week. video games are the route for us.

Thanks Debbie!  I figured it would be a great family game and am hoping I can get the husband to buy into that!!

You look beautiful!
We’ve had a Wii for about three years and the kids love it. DH and I played it quite a bit with them when we first got it – we need to again. I do like the fact that there is a lot of physical movement with the Wii as opposed to something like Playstation where they just sit.

Ohh no – I sure hope you are feeling better Christa!
You are stunning BTW! 😀

so glad your move is working out for you. and you make a handsome couple. hope your feeling better now.

you look gorgeous all dolled up for the ball – and YAY for your girly!
we have a wii and love it. there’s lots of games to play as a family – nintendo tends to have the most kid friendly games of any of the systems.

l@@k at you! gorgeous….and i am so glad the transition went well this time around!

Glad you had a good time BEFORE the food poisoning!