I am so excited to share my first layouts featuring Scrapbooking From The Inside Out's January kit, Reflection.  Great theme for the January kit since we spend the latter part of December and beginning of January reflecting on 2010 or maybe even further back.  This kit is full of great soft colors, with punches of dark gray and black too.  I don't use the peachy/pink colors very often, even though our house is filled with girls, and this had enough touch of it to make it beautiful!

When I was told the theme, then received my kit in the mail and saw this paper, I knew exactly what I wanted my first page to be!  Ideas don't normally come to me in an instant so I was excited!  (Click to see it larger).

I'll be putting a tutorial on the SFTIO blog on the 2nd on how I created the frames.  At first I was going to go with a 12 month theme, but then I didn't want to be stuck with specific pictures so I just used random memories from throughout the year and wrote up my thoughts/reflections for the year.

I also used the word reflection for Maya because it describes her perfectly.  She is our thinker, our analyzer and that girl has the memory of an elephant!  She will remember specific details of things from years and years ago.  Kind of spooky sometimes! 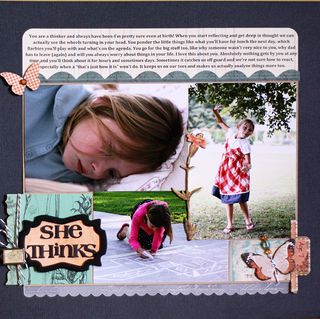 And finally, I wanted to do some long term reflection.  Terry and I have been together since we were babies.  Well, maybe not that long, but we were 19 and looking back it feels like we were babies!  The saying goes "If I had only known then" and I think we would have been even more excited to start our life together had we known what was in store! 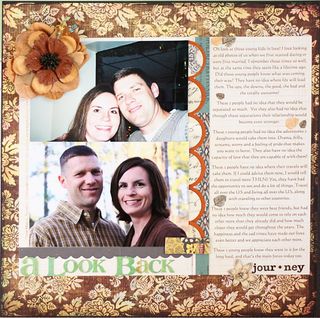 I have a couple more to share later and hopefully you'll head on over to take a look at the rest of the team's interpretation!

Have a wonderful new year!

great layouts!! and i received my box in the mail tuesday – thanks so much!!
happy new year!

Love everything you’ve done with the kit, Christa!