So yesterday on Halloween I chose to wake up at 5:15 am and paid to go run 26.2 miles.  My marathon was finally here and I was ready!  Nervous, but ready too.  I had done the training, tried to mentally prepare and had everything ready so off I went.  I want to add that I knew in my mind I wanted to do a marathon before I got too much older and I knew I wanted to do the Marine Corps Marathon.  The atmosphere of this race is phenomenal.  I was a spectator in 2007 to watch Terry run the race and it took my breath away.  The cyclists, the wounded warriors, the crowds – amazing.

Going to the start line was a little nervewracking, but very cool.  All the t-shirts of runners dedicated to others was very inspirational.  The jets and helicopters flying over gave me goosebumps, but perhaps that was also because I was quite cold!

Started out strong and felt good.  The beginning crowd was amazing.  So much cheering and support at 8 am on a Sunday morning!  It was amazing and I tried to soak it all in!  I trained with my friend Renee and I knew she would go faster than me, so I hung back at mile 2 so that she didn't feel like she had to stay with me.  She is too kind and I know that she would try to stay with me, and with my bum foot, no way I could let her do that.

The first 3 miles also provided lots of views of male runner back sides.  There was a line of men very early on in the trees to relieve themselves.  Did they not see the 1000 porta potties at the start of the race?  AND, men don't like to stand next to each other at urinals (so I'm told), but they were on top of each other during the race!

I was feeling great until mile 5.  That's right everyone, at mile 5 of 26.2 is not a good scene!  My right hip started cramping and feeling tight, but I was hoping it was nerves and cold so I pushed through it.

Around mile 5 is also when I passed a man who was pushing his son (I presume) in a wheelchair.  Took my breath away, and that hip pain I'm whining about?  Definitely subsided!

While I'm obsessing about mile 5, can I just say that the overwhelming odor of POO was disgusting!!!!!  Seriously??? Did you not see the porta potty a mile back?  Luckily it was short lived, but still an overwhelming odor.

At mile 8 we make our way through Georgetown.  Wow, the crowds, the cheers, the music, it was rejuvinating!  Too bad I didn't grab a credit card to make my way into one of those lovely stores for a little early race shopping! We rounded our way past the Franklin Roosevelt Memorial and then out to Haynes Point, which is beautiful. 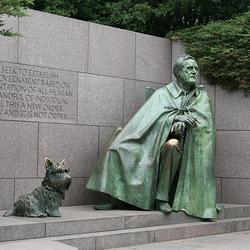 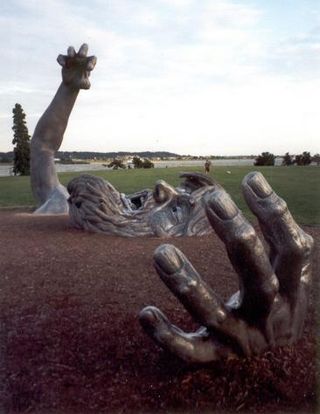 The highlight as I wound around these great sites was at mile 11 when I HAD to go to the bathroom.  I walk around and notice a line of 7-8 deep and I believe my exact words were "you are KIDDING me!!"  There was a very lovely non running woman who let me cut in her line.  A big, big thank you to her for cutting many minutes off my time!!

Then we headed to the National Mall.  I love going to the mall and we try to head over there several times a year.  Never have I run through there and although it was amazing! 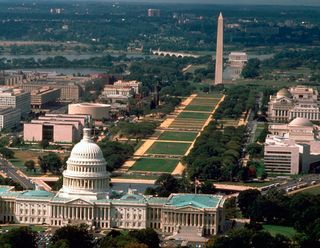 Although this was fantastic to run through here, this is when my foot pain starting really flaring up and letting me know who was boss-MY RIGHT ARCH!!  Holy mother of pain.  But I made it this far and I'm still functional, so onward and forward.  Although each step felt like a 1000 and each half mile began feeling like 5 miles.  I still knew I would finish, but I threw my goal time out the window at this point.  Very disheartening, but I had to put things in perspective.

Then came the 14th Street Bridge.   This marathon is known for the phrase "Beat the Bridge".  I think many runners' goal is to just finish, but coming up right behind that is beating the bridge!  You  have to make it to the bridge by 1:15 pm (14 minute mile pace) or there is a bus waiting for you and you are forced to get on it.  They  have to reopen the bridge by this time to traffic.  This means that if you don't beat the bus then you don't finish the race.  Talk about disheartening.

While I'm on the subject of the bridge I can tell you that this was hands down the absolute worst part of the race.  That bridge felt like it was 20 miles long and I wasn't sure it was ever going to end.  It was part physical anguish and a big, huge part mental anguish.  No crowds, no water, no food, it was hard.  There was a sign that summed it up perfectly:  "The Bridge Is Your Bitch"   Amen.

I was so happy to see the end of the bridge and head into Crystal City.  The crowds were there in full force, a drum band that was colorful and upbeat and my favorite:  a lady with animal crackers.  I could have kissed her had I not been all sweaty and salty.  She was there at the perfect time.  Thank you Animal Cracker Lady!!

Now onto the finish.  It hurt.  Really bad. And to the guy standing on the side telling me to "push through it" in his stern voice, well, he can go suck it.

We rounded the exit ramp past the Pentagon and toward the Iwo Jima Memorial.  I got teary at this point.  I think it was excitement, pain, overwhelming mental anguish and pride.  The crowds-oh my.  Just what you need at mile 25.5!  A friend I ran with for a training run happened to be there too and she was just what I needed!  She found me in the crowd and ran with me a few yards and gave nothing but encouragement-thank you Jenn!!

The finish:  Can I ask who, but a Marine, decides it's a good idea to make that last .2 miles of a marathon an uphill???!!!  Sick and twisted.  But I made it!!  I was so beyond thrilled, so happy, so exhausted.  I finished.  I actually started and completed a marathon.  It's still sinking in.  And I was never so happy to see because I knew it was the finish: 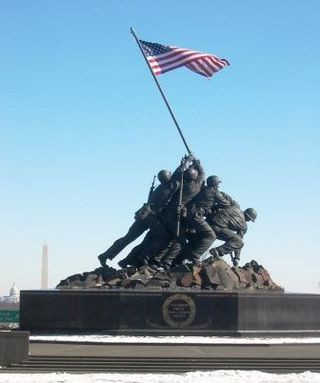 It's done.  I have absolutely no desire whatsoever to do another one.  Never say never, but I think it will stick with me for some time and I'll remember that pain!  I'm glad I did it and I'm glad it's done.  Kind of wishing today that I lived in a one story house.  Stairs=pain. 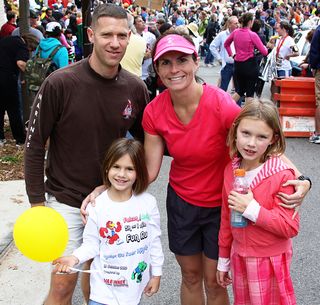 congrats…i don’t know you, but im extremely proud of you! 🙂

Wow, Christa! That is such an amazing accomplishment. Seriously, one that you should be beyond proud of. Congrats!!!

wow! congrats on your run!!! very cool accomplishment! love your pix. dc is one of my fav cities.

congratulations!!! my friend ran this marathon, too. I am anxiously awaiting to hear from here…I assumed she was dead to the world yesterday, LOL!
that is an amazing accomplishment.

SO awesome – many congrats, christa!!!! love that you took the time to write it out w/ photographs – you need to make a mini!

A super HUGE Congratulations!! Fabulous story and a right to feel very proud of yourself!!!

Great job! Huge accomplishment, and so glad you fulfilled your dream!

Way to go! What a great feather in your cap!

that is such a huge accomplishment. you rock !~

Wow, congrats! And looks like some really cool sights along the way!

Congrats on your amazing accomplishment!

Congratulations!!! Cross that one off your list and just be happy that you were able to accomplish it! You rock! 🙂

what an awesome accomplishment! Way to go! I love your blog, and I’m sorry I don’t comment more. What an amazing thing! wishing you quick healing too.

AWESOME!!! I so admire you for doing this! I would love to run a marathon someday!

Thank you so much Holly!  I really appreciate you just coming over to read my blog!

belated congrats my friend – i was thinking of you that morning! it sounds like an incredible route and YOU DID AMAZING! congrats on the accomplishment – I’m so proud of you!!